I have sometimes mentioned Random Idea English, as one of the leading blogs on the net for advanced English learners.

It was through Random Idea English that I came across this resource from the Merriam-Webster online dictionary:

Click on the picture below or on the link above and check if you really know the difference. 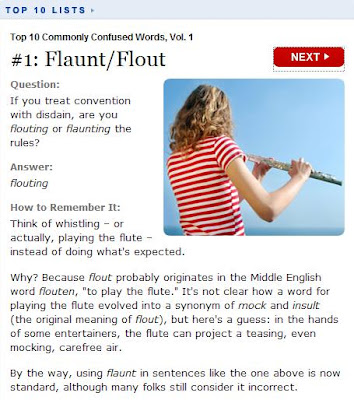 If I should have a daughter

A performing poet since she was 14 years old, Sarah Kay is the founder of Project V.O.I.C.E., teaching poetry and self-expression at schools across the United States.

"If I should have a daughter, instead of Mom, she's gonna call me Point B ... " began spoken word poet Sarah Kay, in a talk that inspired two standing ovations at TED2011. She tells the story of her metamorphosis, from a wide-eyed teenager soaking in verse at New York's Bowery Poetry Club to a teacher connecting kids with the power of self-expression through Project V.O.I.C.E., and gives two breathtaking performances of "B" and "Hiroshima."

Watch Sarah Kay recite her poem and watch her talk, where she explains her commitment to poetry.

Now I Know is a new project from the video production company Sprinkle Lab.

The purpose of Now I Know is to record and publish short videos of successful entrepreneurs sharing lessons they've learned along the way. Each video is under three minutes long so they are short and to the point.

Some of the names you might recognize in the videos are Craig Newmark, founder of Craigslist, and MG Siegler of TechCrunch and ChrunchFund. 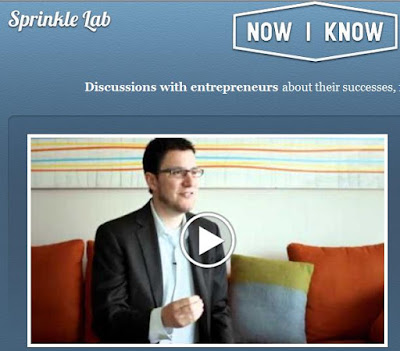 H/T to Free Technology for Teachers.﻿

Thanksgiving is a long way off now, but at the time of this celebration Time magazine published an interesting slideshow presenting their choice of the top 10 Thanksgiving movie scenes. The scenes featured belong to these movies:

A Charlie Brown Thanksgiving
Home for the Holidays
Broadway Danny Rose
The Blind Side
Planes, Trains and Automobiles
Funny People
Pieces of April
Scent of a Woman
The Ice Storm
Grindhouse 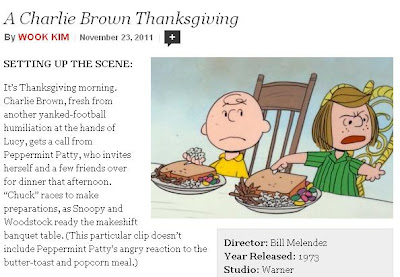 Unfortunately, some of the scenes have been removed from YouTube for copyright claims. Still, you are left with a few of them to enjoy and to bring back memories of Thanksgiving.
Publicado por coordinacion.thats.eoi1z@gmail.com en 0:00

The chaos of English pronunciation

This is a fun poem about the chaos of the English language by Gerard N. Trenité. There are many different versions of this poem. This poem was first published as an appendix to his book Drop your foreign accent . It was a book of pronunciation exercises for students learning British pronunciation. The book was first published in 1909. The Chaos first appeared in the 1920 edition. With each successive edition of the book, the poem was expanded. The most complete version can be found on the website of The English Spelling Society (http://www.spellingsociety.org/journals/j17/caos.php). That version is 274 lines.

Don't worry about understanding the poem - there is no meaning! It's just a fun collection of many of the ridiculous irregularities of English spelling! Just listen to the pronunciation. Most native speakers would have difficulty pronouncing all these words, so don't worry if you find it difficult.

Finally you will find that some of the words at the end of a line don't rhyme. It is due to the fact that the poem is read with American English pronunciation, and not British English, as the poem was initially meant for.

Name that thing is a vocabulary online game from Merriam-Webster Dictionary I learnt about through ESL Writing.

Just a word of warning: This is tough. Good luck! 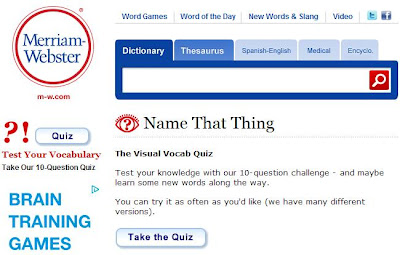 The Huffington Post has made a selection of the best Christmas movies. Their choice includes It's A Wonderful Life, Elf, A Muppet Christmas Carol, A Christmas Story, Home Alone, The Santa Clause, Miracle on 34th Street and Love Actually. There is a short video clip with a scene of each film, and a short comment on the film is also made. 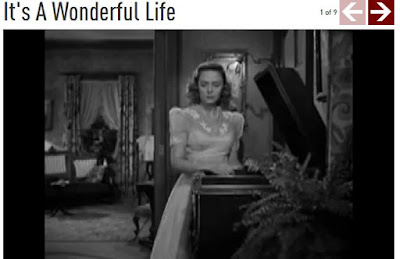